When I think about this part of my journey through Europe I only see it as a huge learning experience. That’s why I have a blog to give the people who are interested the full inside story. While at our home in Radovljica, Slovenia I wasn’t fortunate enough to have carried on with my own training routine and a month before Worlds is a very stupid thing to do. This meant I lost fitness because my program consisted of mostly swimming to keep my fitness up, some cycling and some running to keep strength in my legs, as I was diagnosed with stress fractures in both the tibial shin area in late May and forced to take off running 7weeks. Well after my first race in Europe I wasn’t thinking and did the run section too hard too quickly and the problem came back right away. Closer to World Champs the pain settled, only a little, which left me with a lack of confidence and wasn’t running fit. 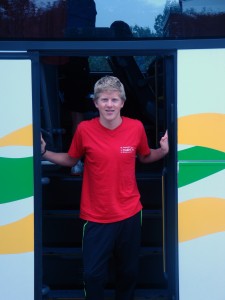 The High performance team arrived in Budapest on Tuesday 7th September after a 7 hour bus ride. We were lucky to have booked out the entire bus for only 15 people so we had a lot of room to put our legs up and stretch. That afternoon things seemed to be on track, feeling good and strong in the water when I went for a swim. That night when the team went to eat dinner I may have eaten something which was too rich and it turned my stomach upside down later that evening. I was forced to take off the next two days and there was only 3days before the biggest race of my life thus far. 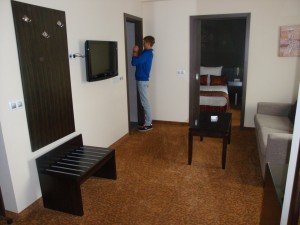 Race day came, 12th September. The day I have been training for a long time. Woke up feeling very nervous and better then the last two days but still weak. It was going to be a long day because our race only started at 17h30 so I went for an early swim to waken my muscles, ate a big breakfast and watched movies for the rest of the day. The hotel we stayed in was really great!  The Regnum Residence is a luxury four star hotel. I shared a room with fellow junior team mate Wian Sullwald and we were fortunate to have a lounge, flat screen TV, a toilet, bathroom and a big bedroom. 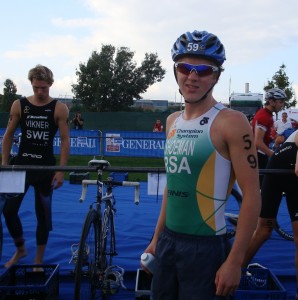 The time came when I needed to head off to transition to have my numbers put on myself, my bike and helmet and then set all your equipment up in transition. This race was a first in many ways. It was a first World Champs for me, biggest start I’ve had (80 athletes) and first time racing with such a big, electrifying crowd.  The starting official sounded “ON YOUR MARK”  and the electric horn went off. The first couple of meters I was ahead of the field but before I knew it, it felt as if my body switched off and I was being pulled back into the chaos of the other athletes, punched, pulled, swum over. I looked to my right and I saw an opening so I swam across and found my own space and put my head down and sprinted for the first bouy. I reached the first bouy in the lead and carried that through till the swim exit with a time of 8.16. I had only put about 6-8seconds on the 2nd athlete. This gave me time to relax and concentrate on having a smooth transition. I jumped on my bike and felt no power. I nearly missed a group of 3 athletes coming passed me attempting for a break away, but the chase pack was just too strong on the day and caught us after about 3km. The cycle route was very dangerous and one of my main goals was just to stay on my bike and get into transition safely. I also stuck to my other goal which was to conserve as much energy and that was to just stick in the front pack and do no work on the front end. After the fastest cycle split of the entire World Champs the front pack of juniors came into transition after 26minutes for 19.08km. I had one of my worst transitions, put my foot in my shoe and bent my toes sideways so I had to take it off and put it back on again. At the end I came out of transition about top 20. I wasn’t in good form and having my stomach turn upside down 3 nights before I knew it was going to be a painful run. I was literally “running on empty”. after 2.5km I saw I had a 15second penalty for a reason I am still unsure of. This was where I lost many positions. I gave the final 2.5km all I had and finished 51st and collapsed after the finish line.

I was really proud of myself just to finish the biggest race of the year and got loads of experience under my belt.  From now 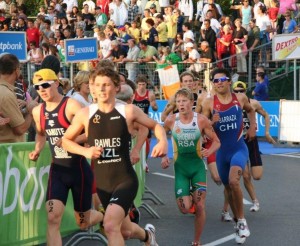 onwards its time to rest, mentally and physically so when its time to start training I will be itching to get back into it. Also its perfect timing to sort out my shins and get ready for standard  distance  triathlons.  I’m moving up to the big boys now.  Bring them on!

Here is a 5minute video of the junior men’s race. Watch me come out the water and transition in the lead! and a little on the bike if you notice.