Well its been a hectic first 3 months this year, enrolling as a student at Varsity Collage, studying IMM Marketing.  I really wanted to do graphic design but my options were limited at VC as they don’t teach it there. So far so good, it is a really cool vibe and totally different from school. It took a few weeks before my brain was back in the game!

Apart from VC eating up all my spare time, training on the other hand has got onto a whole new level of crazy! I have been struggling to cope with all this but still manage to get in some quality times.  Things will be better next year as I will only have 2 subjects a semester.

With all the stress from college I still managed to to get some decent results at the annual worlds biggest open water swimming event, Midmar Mile. I came out of the water in 3rd place in the team event with my team (Varsity College) taking the win. The next day was the main event and this years event attracted many top international swimmers like Olympic champion, David Davies.  There was also 2010 World Series open water champion, Chad Ho in the mix. I placed myself 9th overall and 5th amongst the South Africans.

My level of fitness was starting to shine 3 and a half weeks ago where I competed in the Future life K Swiss Sprint event and put my head down and gave it 100% from the sound of the gun. After a fast swim in my ProfileDessign wetsuit I had about a minute lead over my next competitor and headed out onto a hilly bike course extending my lead to around 6minutes. Unfortunately a German athlete took a wrong turn, not completing the cycle and, was DQ but carried on racing. He came into T2 at the same time meaning I had someone to race! We headed out and immediately I noticed he was a strong runner so I needed to give the last 16min run 110%. Through the hilly off-road run we were neck to neck and the final 100m I gave one big surge edging him out at the finish line. The next competitor came in 9minutes behind. My new Blade Light Race K Swiss shoe did the job and felt fantastic! 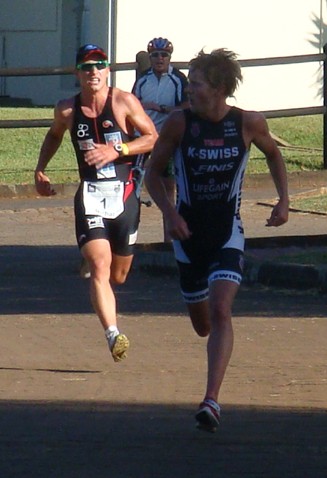 The next weekend was the SA Champs that was also an Africa Cup attracting athletes from all over the world including 2006 World Champion Tim Don. I wasn’t fully prepared and hadn’t done enough run training to have a decent run and avoid injuries. I already had flights and accommodation booked so just did it anyway, besides I had the experience to race Tim Don! Race went underway in a non-wetsuit swim in the warm windy town of PE. First lap of 750m was with ease just keeping with a front pack of 7. The second lap I turned up the gas a bit leaving enough space to keep the ones behind me chasing but not enough to break their spirits. This caused a 40 second gap between us and the chase group leading into T1. Because of a fast transition only 4 survived the lead break away. Myself, Erhard, Tim and Wikus. We wasted no time and started doing equal work in the front and this showed as we put an extra 20 seconds into a large chase pack behind us. The experience cycling with the best in the world was really cool. I wished that 40km cycle could have been further 😉 unfortunately defending 2010 SA champ Erhard had a puncture on the last lap and was forced to withdraw from the race. This left just the 3 of us leading into T2. My race ended after just 3km because a niggling calf stain got the best of me and I didn’t want to make matters worse and made the wise decision. Tim Don ended up wining the race with Cluade Eksteen coming in second taking the SA title. Congrats to them! 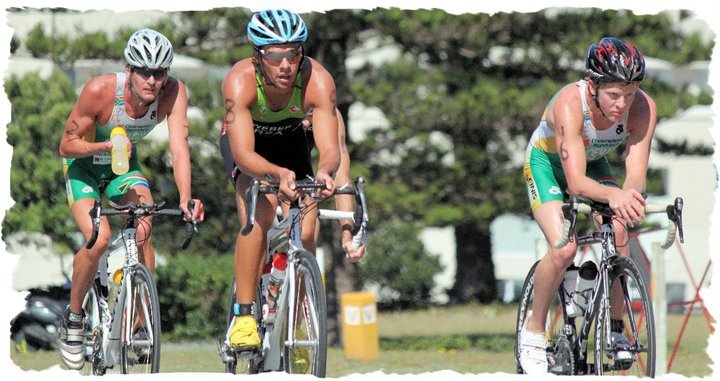 For me it was back to hard training and finally designed a full time triathlon programme with my coaches. I say watch out when I’m back racing, its going to be exciting!