On the 2nd of August the High Performance squad came together at O.R Tambo International Airport. We departed

from there and after 2 flights, a bus ride from Venice, Italy to Radovljica, Slovenia and 28 hours of travelling we arrived at our 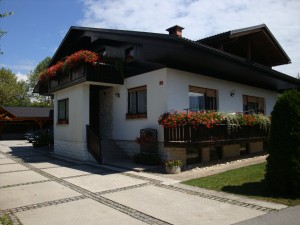 European home for our 6week stay. My first word when we arrived in our home town was “WOW”. We were surrounded by mountains, everything was just so clean and organised and such a different scenery. We stayed in a cosy house, girls upstairs and boys downstairs. Our room was plain and simple, two beds and a big cupboard. The girls rooms were a little better because they had a TV in their rooms and a nice big lounge to chill in. well we spent a lot of time up there anyway watching movies.

I kicked off training that next day with a swim. From our house we only had to walk 500m to this top class pool arena. Better then anything I have seen in South Africa, BUT there wasn’t a stadium?? That afternoon we had a jog to the track that was just behind the pool. Now I’m thinking they have all these facilities and it’s a really small town. We get there and it’s a brand new tartan track, still busy working on it, ALSO no stadium?? Purely for training I would guess. They obviously look after their national athletes and provide them with a facility purely for training in good conditions. I wish I could train THERE! Cycling for me was the most enjoyable by far. One route which we did every Tuesday morning went through two very big mountains, they were so close it felt like you could just reach out and touch it and so big you felt as if you an ant finding their way through a deep crack in the ground. It was truly amazing and I was so blessed to be training in these conditions. It only made me want to train more!

There was one thing I needed getting use to and that was washing dishes and cooking food. Yes cooking for the entire team of 13 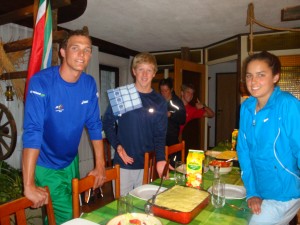 people. Luckily we didn’t have to do it ourselves so we were put into groups of three and each group gets a chance to cook dinner and wash dishes that day. I joined up with Theo Blignaut and Carlyn Fisher. We called ourselves team HTC (Henri, Theo, Carlyn). First time was very challenging, I have no cooking sense and just had to do the chopping and setting the table out. The food we made came out tasty but it only got better from there, our food just got more and more delicious and I started getting more involved in the cooking part. By the last 2 weeks teams started getting competitive (typical athletes) and wanted to see who makes the best dinner so we were eating really good and tasty food. I can at least say I learnt a new skill which doesn’t involve triathlon. Washing the dishes wasn’t fun at all but when you work as a team it goes by quickly. Carlyn would do the scrubbing, I would do the rinsing and theo would do the drying and packing away. Now that’s TEAM WORK. 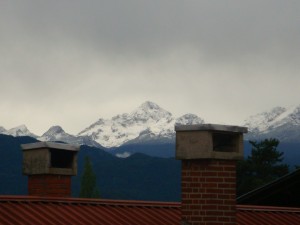 The weather in Europe is a lot different to the weather in SA. When we first got there it was warm and humid, but only for a few days. It would mostly be overcast, luckily no rain. What surprised me the most was on one Saturday a storm came from no where and the weather from there turned upside down. The next day we look at the mountains around us and there was SNOW on the mountain tops, but its summer?? Temperature went from high twenties down to below 10 degrees. I remember the cycle we had to do when it was that cold, it felt like mid winter in Pretoria. Colder than winter here in Durban. Wow, didn’t expect that but next time I will be prepared!

My favourite training session believe it or not was the one where I hurt the most. It was the most painful experience I’ve ever had. It was a 42km ride to the mountain pass and then 9km of SOLID climbing. Average gradient was 14% and sometimes getting up to 17%! Climbed from 800m to 1600m. It was so steep around the corners they had to put cobble stones instead of tar which only makes it more dangerous when coming back down. You know you at a high altitude when the temperature drops like 10 degrees. I was starting to get cold and I was climbing?? We reached the summit and we couldn’t stick around for too long otherwise we would probably get hyperthermia going down. From what I got to see there were hundreds of sheep up top there and could see it was a long way down! When we got back down and about 38km back home the heavens opened and gave everything it had at us. It wasn’t only raining but also hailing, the wind made things 10x harder making the hail hit us harder which means more pain and almost blowing us off our bikes. I can say it was the most dangerous cycle I’ve ever had.

Tuesday 7th September 5am we departed from our base home and 7 hours later arrived in Budapest, Hungary for the World Championships.