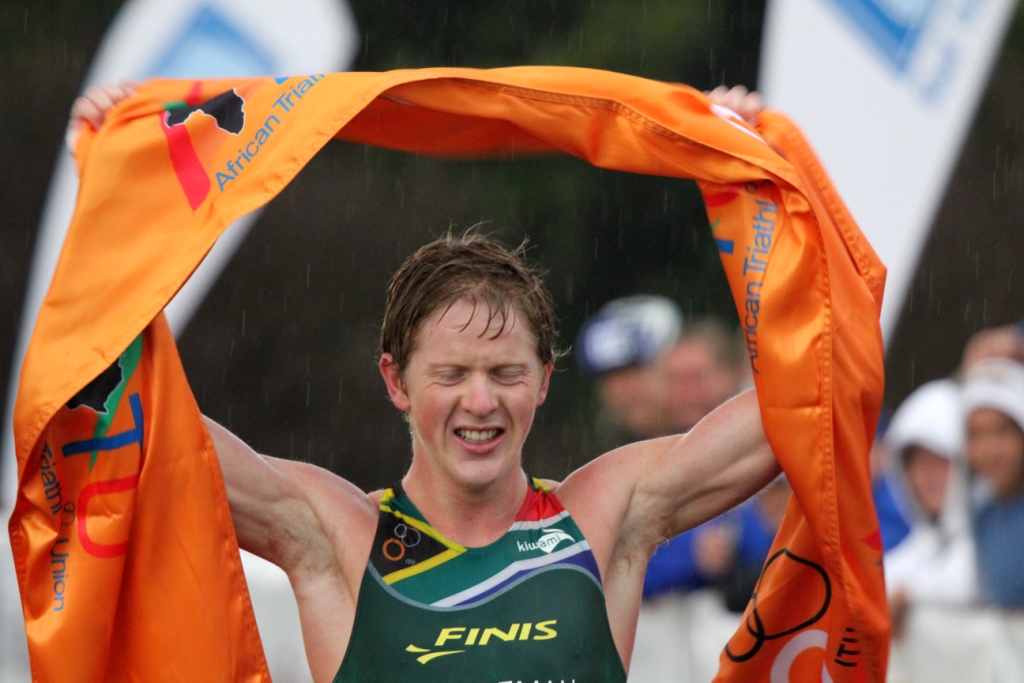 On Saturday I had my first ever ITU win in Troutbeck, Zimbabwe. It has been my most special achievement yet.

I left Durban in the early hours on Thursday and arrived in Troutbeck that night at 7.30pm. After a good dinner and sleep I woke up to a beautiful view of the lake and venue where the race was going to be. At 2000m above sea level I was out of breath just by packing my bike. I had good warm ups but felt the altitude affecting me with a sore chest and headache.

On race day I was feeling nervous because of the difficulty of the course we were racing. I made sure I had a good breakfast, fueling up for the hard race ahead and not make the same mistake as I did in Auckland a few weeks ago.

As I started warming up, thick heavy clouds came over the venue and it started pouring with rain. It would be a little dangerous as it hasn’t rained there for a long time and there was lots of oil on the roads, making it very slippery. I was very relieved that it was not sunny because it would have been a killer out there!

In the swim I went my own pace at about 60-70% of max and had a 1m 40s lead over Chris Felgate and Rudolf Naude. The bike course was tough, riding 3.3km uphill and back down again to complete that lap 6 times. I started the first lap easy to see what conditions the roads were in. I saw Felgate and Naude closed down on me so I picked up the pace going harder every lap and they only managed to put a 30s dent into my lead while working together. This put me with a 1m 10s lead going into the tough hilly run course. I started hard and just hoped that I wouldn’t die because I really wanted a win here. After every lap I felt I was getting faster and I didn’t feel any fatigue, so the last lap I really pushed myself and won the race with a 3m 46s lead over Felgate and 5m 47s over Naude.

I was really happy that I had such a strong performance with one of my proudest wins yet.

It was an honor racing Zimbabwean Legend Chris Felgate over the past couple years as well in this race as it was his last International race. He has retired from competitive triathlon.

I would like to give a huge thanks to Triathlon Zimbabwe for welcoming us and treating the athletes so well. I felt very honored and special to be a part of the race and competing. I felt that the smooth running and good organization of the event all contributed to my win at the end.

I would also like to thank my sponsors FINIS, Cytomax and Future Life as well as my family and girlfriend for their great support.

I will have a video from the race ready as soon I can so watch this space for an update. It will be a special one!

My next and last race of the year is in Vanderbijl Park for the final of the BSG Triathlon Series.